Neurologists are always cautious when making a diagnosis of Parkinson’s disease (PD). This shouldn’t be the case because PD is not difficult to recognise-at least not most of the time. For one, PD has classical clinical signs- the trio of resting tremor, slow movements (bradykinesia), and stiffness (rigidity). For another, it is asymmetrical, starting and remaining worse on one side of the body.

All these features are however vague in the early stages of PD. To make matters worse, there are many other diseases that mimic PD. These include multiple system atrophy (MSA), progressive supranuclear palsy (PSP), Lewy body disease (LBD), corticobasal degeneration (CBD), and even SWEDDS (if it exists at all!). And always lurking in the shadows, waiting to catch the neurologist out, are dystonic tremor and essential tremor.

These PD mimics challenge and intrigue neurologists in equal measure. They contribute to the delayed and missed diagnosis of PD in 20% of cases. Are there shortcuts out there to improve our diagnostic accuracy? A simple test perhaps? Maybe some biomarker? Here are 6 budding contestants.

DAT scans are now in general, even if not universal, use. They help to distinguish PD from conditions such as essential tremor or drug-induced Parkinsonism. DAT scans are however expensive, and they do not distinguish PD from many of its other mimics such as MSA, PSP, (you know the roll call). There are indications that DAT scans may be normal in cases of PD. We therefore clearly need better, cheaper (and newer!) PD biomarkers than DAT scans.

Perhaps the answer is in a spinal tap or lumbar puncture (LP). A lumbar puncture is a simple but dreaded test. It is however useful for giving us access to the cerebrospinal fluid (CSF) that bathes the brain and spinal cord. Analysis of the CSF often gives the game away in many neurological disorders. It is not surprising therefore that researchers looked at a panel of nine CSF biomarkers that may identify PD. The paper, published in the JNNP, suggests that there may be biomarker roles for neurofilament light chain (NFL), soluble amyloid precursor protein (sAPP), and α-synuclein (of course). CSF α-synuclein is the focus of another paper in BioMedCentral which reports that one form, oligomeric α-synuclein, is the one to watch out for.

Another set of CSF biomarkers is related to blood vessel formation (angiogenesis). I came across this in a paper in Neurology titled Increased CSF biomarkers of angiogenesis in Parkinson disease. The authors are referring to vascular endothelial growth factor (VEGF) and its receptors VEGFR-1 and VEGFR-2. Others are placental growth factor (PlGF), angiopoietin 2 (Ang2), and interleukin-8. Enough to keep researchers busy for a while. 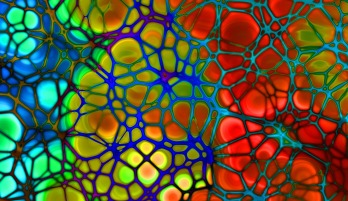 Even the most compliant patient would prefer to have a blood test rather than a spinal tap. Thankfully there are some blood-based biomarkers in the offing. One set are called α-synuclein blood transcripts (SNCA transcripts). The authors of an article published in the journal Brain report that SNCA transcripts are consistently reduced in the blood of people with early PD. The accompanying editorial however cautions on the utility of these SNCA transcripts because low levels are also seen in some people who do not have PD. The true value of SNCA transcripts may lie in their ability to predict cognitive decline, but how many people really want to know that?

Even better than blood and spinal fluid biomarkers would be something totally painless. And to the rescue comes retinal optical coherence tomography (OCT). OCT uses light waves to take pictures of the retina. This allows measurement of the size of different parts of the retina; the area of interest in PD is called the foveal pit. A paper in Movement Disorders reports that OCT is a sensitive marker of PD. The authors show that the foveal pit in PD has a unique form; it is shallow in the superior-inferior and the nasal-temporal slopes. Perhaps neurologists will soon be running to ophthalmologists, cap-in-hand, to save their blushes.

Back to painful biomarkers I’m afraid, all in aid of clinching an early diagnosis you must understand. This time it’s salivary gland biopsy. Some eager researchers took biopsy samples of the submandibular salivary glands of people with early PD. They then looked for, and found, α-synuclein in about 75% of them. Their paper is published in Movement Disorders titled Peripheral Synucleinopathy in Early Parkinson’s Disease: Submandibular Gland Needle Biopsy Findings. Unfortunately  20% of control subjects without PD also had α-synuclein in their salivary glands. Could these people have pre-manifest PD? We must await larger and longer studies before we start needling away at the salivary glands of the worried-well.

What if the answer is not in the salivary glands? Then we should be really afraid because α-synuclein has popped up in …the intestines. A review paper in Movement Disorders describes this in the brilliantly titled Gut Feelings About α-Synuclein in Gastrointestinal Biopsies: Biomarker in the Making? Another paper published in PLOS One takes things further, reporting an association between intestinal α-synuclein with increased gut permeability. I’ll make no further comments on the gut; not with the threat of cameras and scopes going up all sorts of body openings.

Are there any other biomarkers out there? Please leave a comment.

5 thoughts on “What is the state of Parkinson’s disease biomarkers?”